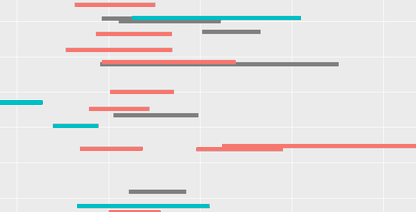 A group of friends maintains a Facebook group for music recommendations. Every day, someone comes up with a hashtag and the community replies with links to songs, mostly from YouTube. The hard part of the game was, however, to gather all the songs at the end of the day, since on good days we could end up with more than 100 songs recommended by musicians and experts.

My proposed solution to the problem was to use the FacebookR package for R to mine all the information in the group. One thing that I noticed, though, was all the information that you’re actually able to mine by using the Facebook API about publications and reactions. The information was transformed and organized by hashtag. The second part of the project involved using YouTube’s API to retrieve not-so-clean artist and song information. Finally, I “manually” created playlists for each hashtag and put it online on a static web page on a test server for the group. I’ve successfully used the playlists at parties in a few countries around the world, so I’m happy with the result.

You can see the source code here.

This past August I presented alongside Isaac Robles a paper that analyzed the work of members of the Latin American Fab Lab Network on regional collaborative projects, through their engagement with Google Drive project folders.

A few months later, I have worked on the solution of some technical dificulties on the mining of data (I am in debt with Mario Gómez and Joksan Alvarado for all thier support in making the script) and I have worked on an R script to clean and graph some of the data, for future analysis. You can see the script here.

Some of the interesting findings of this analysis is the lack of connections between number of participants and levels of engagement for certain periods, and the inconsistence in the participation of some project participants, which may mean that certain types of incentives must be necessary for these types of projects.

Due to the constraints of this study, however, it is difficult to compare the findings with other types of initiatives.

As a result from the workshop made at Fab13 in Santiago, Chile, I worked with Mario Gómez with the design of a proof of concept for a model of visualization of data for people who mobilize in the city. For this, sample data from the Transantiago system was mined and visualized for further analysis. The concept is the feasibility of implementing Internet of Things devices to measure pollution in the city, in order to have more accurate environmental readings of the city in real time.

This platform was completely developed by Mario Gómez and presented at the #DatosYCerveza event organized by Escuela de Datos and Cadejo, in San Salvador. You can view the platform here.